If I had to name the top 10 hardcore punk records ever, among them it would definitely be “American Paranoia” and “No More Mr. Nice Guy”. First, very raw, while “No More Mr. Nice Guy” was mature and totally different yet both are phenomenal. After 17 years of hiatus, the band returned in 2008. with three original members. They released “No Way Back”, which is pretty good, but unfortunately it came out only on the CD. They went on European tour, tour with Municipal Waste and Napalm Death followed then again they briefly stopped working for a few months. They’re coming back again with the new LP that came out on “Beer City records” on 16th April.  Band’s guitarist, Eric, responded to my questions about everything that interested me about the band .

So, what’s new with the band?  You had some lineup changes; Walter is not in a band anymore?  I saw him drumming for DRI?

The only thing that’s new with the band right now is the new LP and a possible tour of Japan in November. Walter is doing some shows with us, but we are looking for a replacement.

In how many bands you played so far?

Did you release anything while you were playing with Deathtoll?

No, they had already released the 45 and the split LP. I joined afterwards and played around 100 shows with them. We did however record for an LP, but the recording is still unreleased. 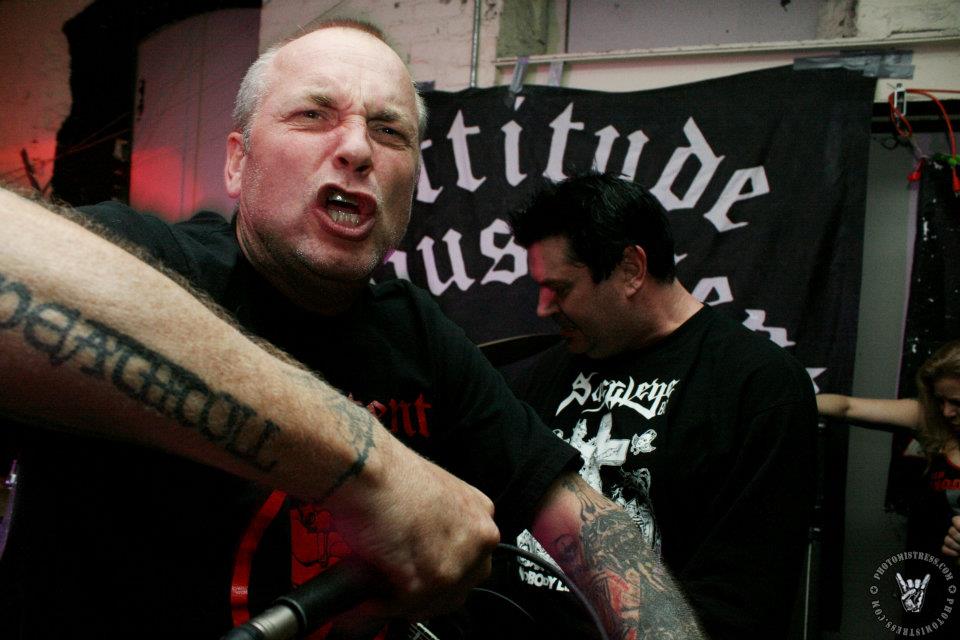 What was the original line up and how old were all of you when you started Attitude Adjustment?

The original line-up was Kevin Reed vocals, Chris Kontos drums, Eric McIntire guitar, and Rick Strahl bass.  We were all about 16 or so at that time.

Andy replaced Kevin in Late 1985, and we recruited a second guitarist Chris Scapparo at the same time. I was out of the band shortly afterwards. The band went through its first official break up in late 1986 or so, and Chris Kontos decided to get me and Kevin back in the band, while Andy, Rick, and Chris Scapparo decided to take half of our name and form Attitude. For the record: Attitude and Two Bit Thief were NEVER Attitude Adjustment. Attitude Adjustment and Attitude were/are two separate entities.

What made you decide to start playing again in 2007/2008 after 17 years hiatus? What is it that drives Attitude Adjustment?

What were members of AA doing in the meantime?

All the members of A.A. were playing in a band called Deathtoll, with the exception of Chris.

Before the reunion you had a show with Brandon from Direct Control on drums playing few songs.  How was the show? Have you heard his new bands, Obsessor  and Commando?

Yes I’ve heard of both, Obsessor and Commando. Brandon is a great guy. He was playing in the Bay area, and we went to see his band play (as we are fans of his bands as well) and he said “hey will you guys come up and play a few A.A. songs with me? So we obliged and it was fun as hell. 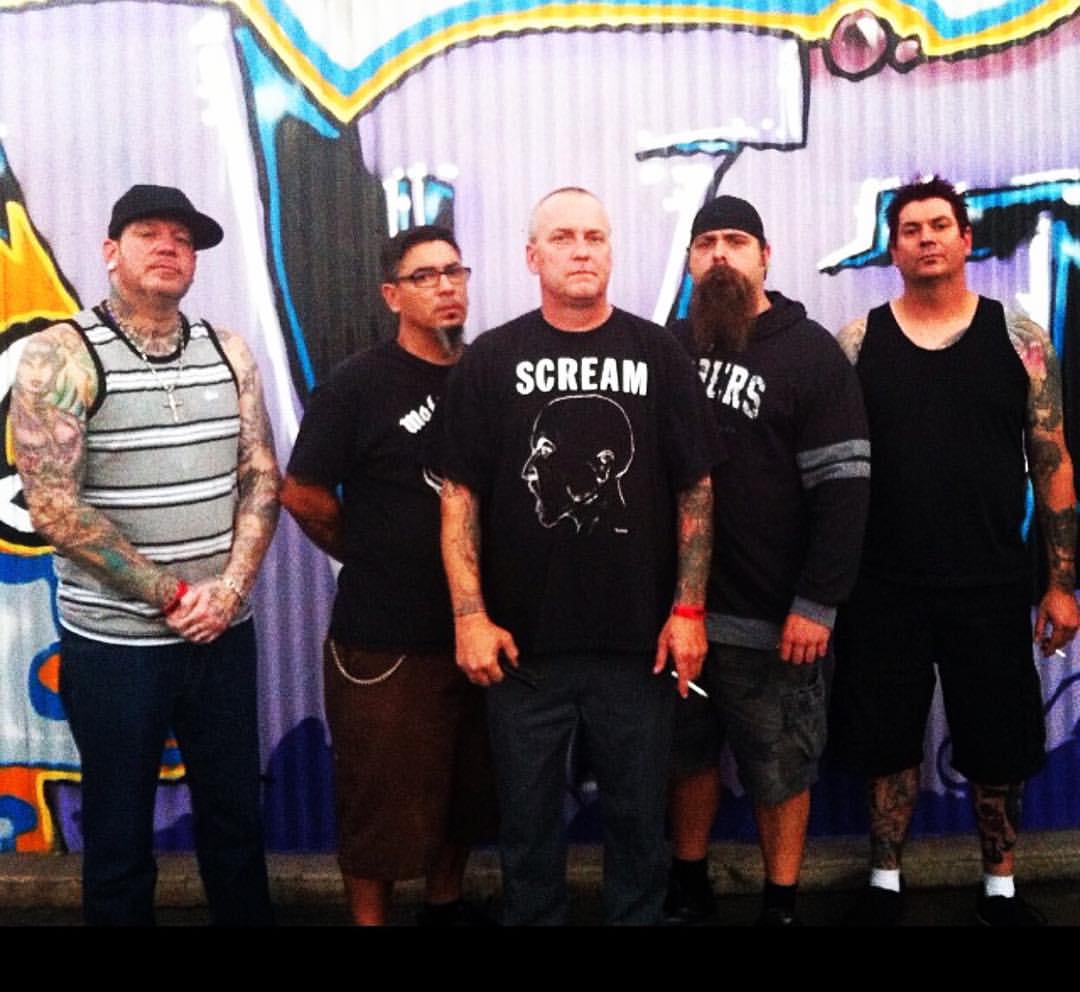 Few years ago you were on a tour with Municipal Waste and Napalm Death. How did that go and how did it feel to play in big venues and open for a quite popular band?  You kind of stopped playing right after that tour, didn’t you?

Yes, we did stop playing after those shows for a while. We were having band issues and Chris left the band, so we decided to get Ray Vegas back in the band again and add a new Drummer, Walter Ryan to the A.A. camp.

Then after few months you went back together but without Yapple and Kontos. Why? How come Ray came back? What was he doing in the meantime?

Yapple (Brian) just wanted to do other things and we respect him with his decisions. We are still friends with him. Ray wanted to come back and play in the band, and we thought it was a good idea, so we got him. He was playing in Social Unrest, but the band doesn’t play that often and he wanted to keep busy.

Before No way back release you went on a European tour. How many shows you played, what were your impressions?

We did a short European tour in 2010 of around a dozen shows or so, and we played Belgium, Germany, Holland and Denmark. We recorded the album while we were in Denmark in Copenhagen,

How satisfied are you with that album, production, visual appeal of the album and overall collaboration with “TAANG“? Will No Way Back be released on vinyl?

We are very happy with the last album, and we thank Taang for releasing it along with our previous recordings. We are interested in pressing it on vinyl, so hopefully we will see it on wax soon! 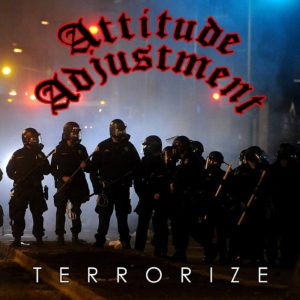 Why did you change the label? At first, record was supposed to come out on “Southern Lord“, but in the end it came out on “Beer City“.

After reviewing the contracts with both labels, we just felt it was best for the band to go with Beer City.

Tell us about the new album?  Are you satisfied how it turned out? Compared to the previous one what are the differences? Why such a long pause, almost 5 years?

We are very happy with it. The songs are more back-to-basic hardcore style. There was a long pause because we were dealing with member changes and writing.

My understanding is that “Beer City” will release “Terrorize” LP on Record store day and you won’t be able to find it online or order it direct. You have to go to your local record store on April 16th to get it. What about the fans in Europe, how can they get their hands on the record?

I believe you can get the album through the stores that are ordering it. I would hope that you can get it directly from them as well.

Do you know who will be distributing your record in Europe?

Not at this time, no.

Knowing that you are a big David Bowie fan, what do you think of his last LP? Do you have all his records? Did you have a chance to meet him?

I thought Blackstar was great. I do have all his records and much more. I was also glad to have met him three times too. 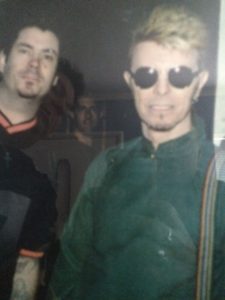 This year we lost two icons, first Lemmy than Bowie, both to cancer. Did you know that Bowie was sick? What was your reaction when you heard they died?

I don’t think many people knew he was sick except for those that were close to him. He hid it very well. The death of both of them greatly affected me. They can never be replaced.

What do you think, did the fact that Chris Kontos  played with Machine Head help Attitude Adjustment in any way?

I have no idea if it did or not.

What was your reaction when you read what Rob Flynn said about Attitude Adjustment comeback show?

We all read it and thought it was cool. Obviously he had a great time and so did we! It was nice for him to have taken the time and post that.

What’s the situation with Bay Area bands now? How different are things comparing to 20 years ago? What are some good new bands from Bay area?

The situation with Bay area bands now is that the scene is still great, but also a lot different than 20 and 30 years ago. Times change, issues change, and bands change. Our hearts are still where they were when we first started playing, and for us that it the most important thing. As far as bay area bands, ZBS, Oppressed Logic, Trouble Maker, Bloodshot and Dialated are a few offhand that are pretty good, although these bands have been around for a while.

In the radio show THE VERY MANIC JIMMY SHOW CABBS you talked about the importance of Maximum RNR, both zine and radio, your upbringing in hardcore , you were making mix tapes etc . How important is Maximum RNR today, especially for Bay Area punks? Is the essence of it all little bit lost in today’s age of internet?

What do you know about Serbia?

Actually I do not know much about the country but I’m sure it’s a great place.

This year marks 32th anniversary of Attitude Adjustment. Are you planning anything special?  Any chance to see you playing in Eastern Europe and Serbia?

Well, hopefully we can play Japan at the end of the year and also continue playing and recording (and touring).

Thank you Nemanja for doing this interview with us, and hopefully we can meet some day!